It was a blustery day, so Sam and I decided to follow the track running northwards behind the sand-dunes. Wild creatures often shelter on this eastern side  – but today there was no escaping the  January winds, which can blow from one or other quarter with sudden ferocity.

We decided to cut through the dunes onto the beach, pausing to inspect an ancient Bearded Heath (Leucopogon parviflorus) of impressive size: an Elder.  Each year we come this way,  in search of seeds for the Boatshed nursery.

So far I haven’t  been able to raise ‘offspring’  from either cuttings or seeds; I will keep trying…

As you can see from the photos, the beach was deserted: not a soul to be seen –  north, west, south….not even a gull or tern. The tide was far out, and tiny wavelets showed their flecks of white against the sea-blue.

Always a welcome and healing sight.

Thereafter we turned south along the edge of  the Bay (where Silver Mist, Morning Mist, Whimbrel and Gannet began and completed their countless voyages); past the familiar rocks and pools with their special names – and back to the shelter of our old Shack and the Lady Bay Boatshed.

January gales have been especially ferocious this year, but these two structures continue to stand firm. They have solid foundations.

Afterthought:  do gulls and terns have souls? I remember Dad declaring that dogs have souls – so why not seabirds?

I feel sure that they have tiny souls, great souls. 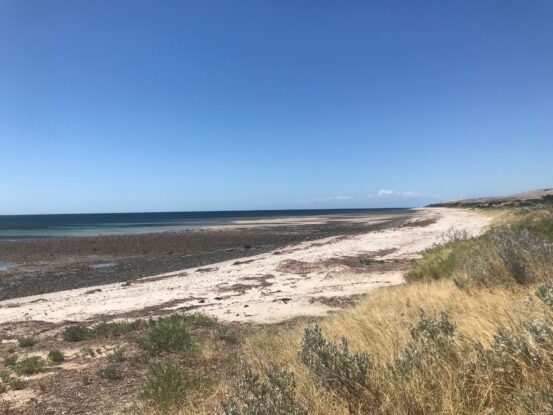 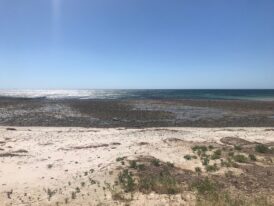 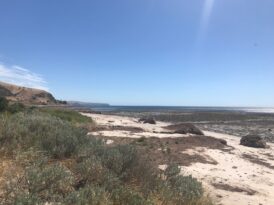 These are small prints, each a  gem.

Nishijima was born in 1945. He continues to design, carve and print superb images. 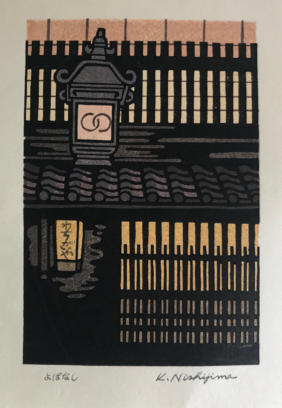 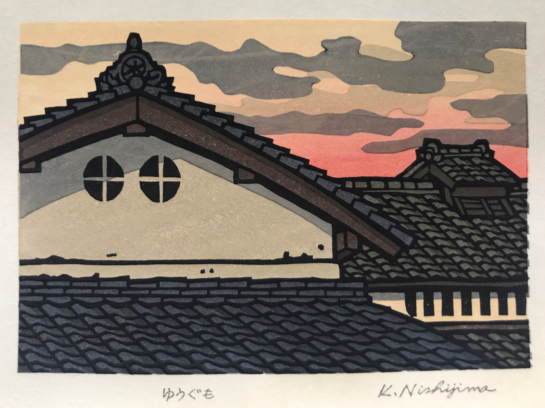 A few weeks back Sam and I visited the big Sequoias – planted near Railway Dam, at the heart of the Belair National Park,  in about 1895.

The Park was our boyhood realm of long ago – the family kingdom – and every square inch of it is therefore familiar.

We were not so much visiting, as returning….

The Sequoias are massive trees, of breath-taking height. Their topmost canopies seem to brush the heavens, and the spiralling branches invite further exploration. They remind me of the fabled Mallorn Trees of Lothlorien, at the top of which the elven-folk built their secret pathways and aerial homes.

For some years I have been keeping a weather-eye out for Mallorn seeds, in the hope of establishing a grove of  silvery and golden saplings next to the Boatshed.

It is, as the saying goes,  a work in progress.

As for the Sequoias: they tower above the ancient bushland all around. They seem ancient, but they are not;  they seem to belong – but after all, their true homeland is far away, on the western sea-board of California.

I have an idea that each twig, each leaf retains a subtle recollection of its original home: its inheritance – and the knowledge, or knowing, is somehow passed on from one generation of leaves to the next. It must surely  be so, even if the recollection lies beyond our ken….

high-up branches
on the lookout
for ancestors 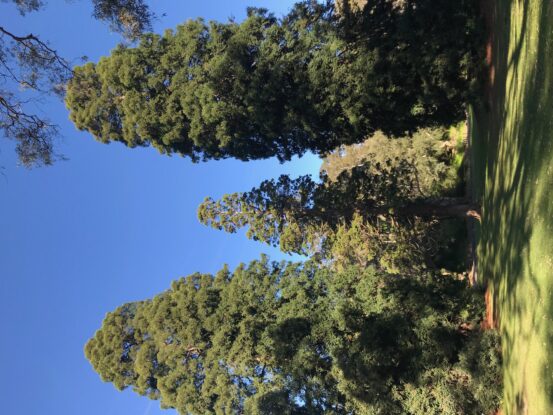 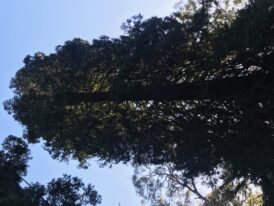 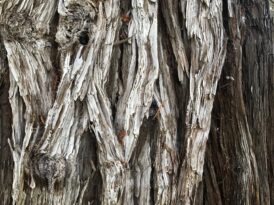 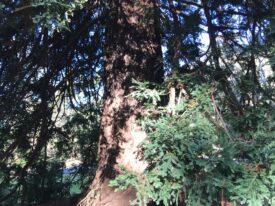 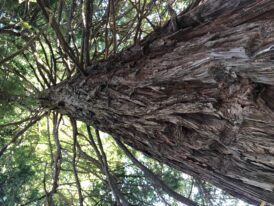 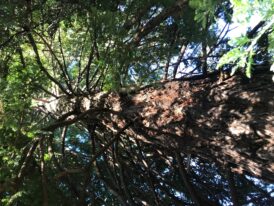 Now that the seams are reinforced from the inside, I can remove the tape from the outside of the lute body, and clean up each rib where it meets its neighbor.

Once again, a simple wood scraper should do the trick.

Thereafter, I must shape and install the end clasp – and then….but that is enough for now.

As Dad used to say about boat-building: one job at a time, bit by bit, and all things in due succession…. 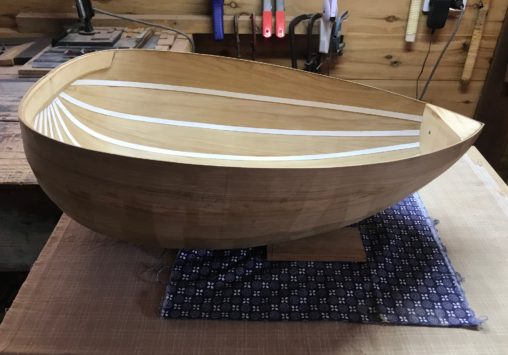 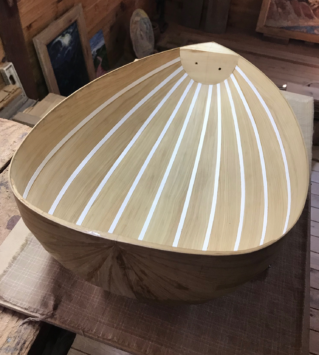 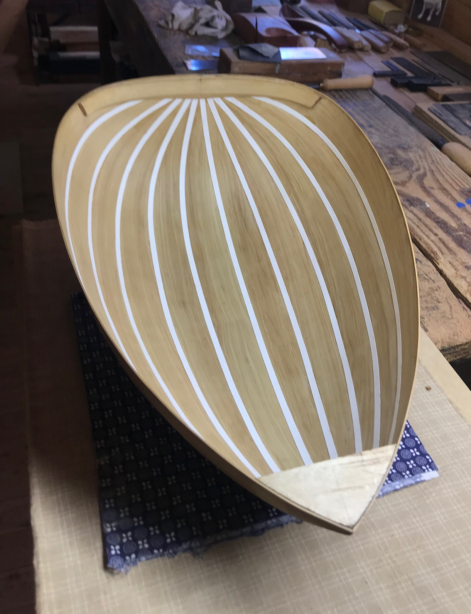 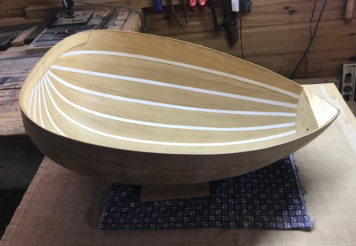 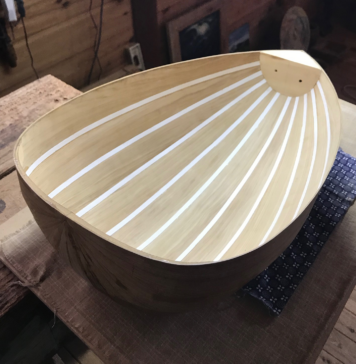 Ready for action, and delivered.

We shall find out soon enough whether or not it is functional…. 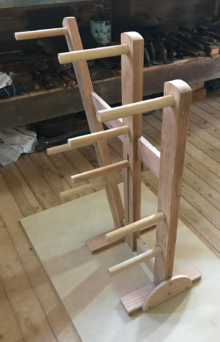 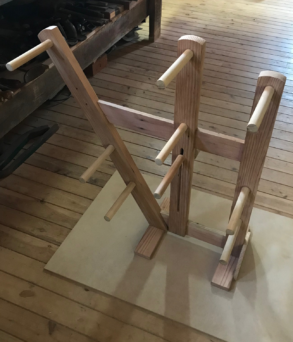 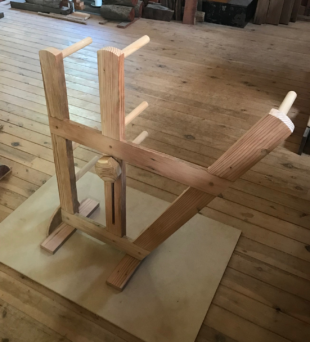 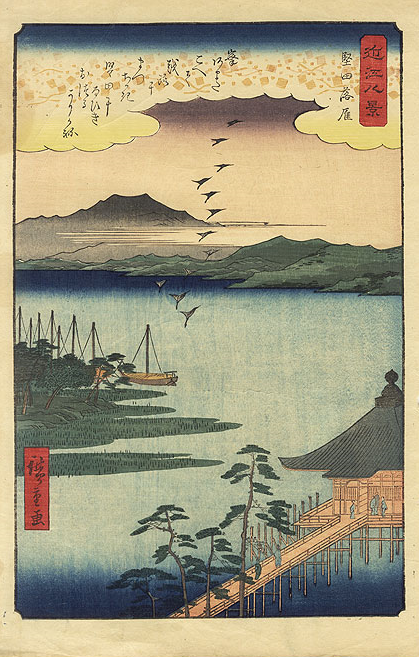 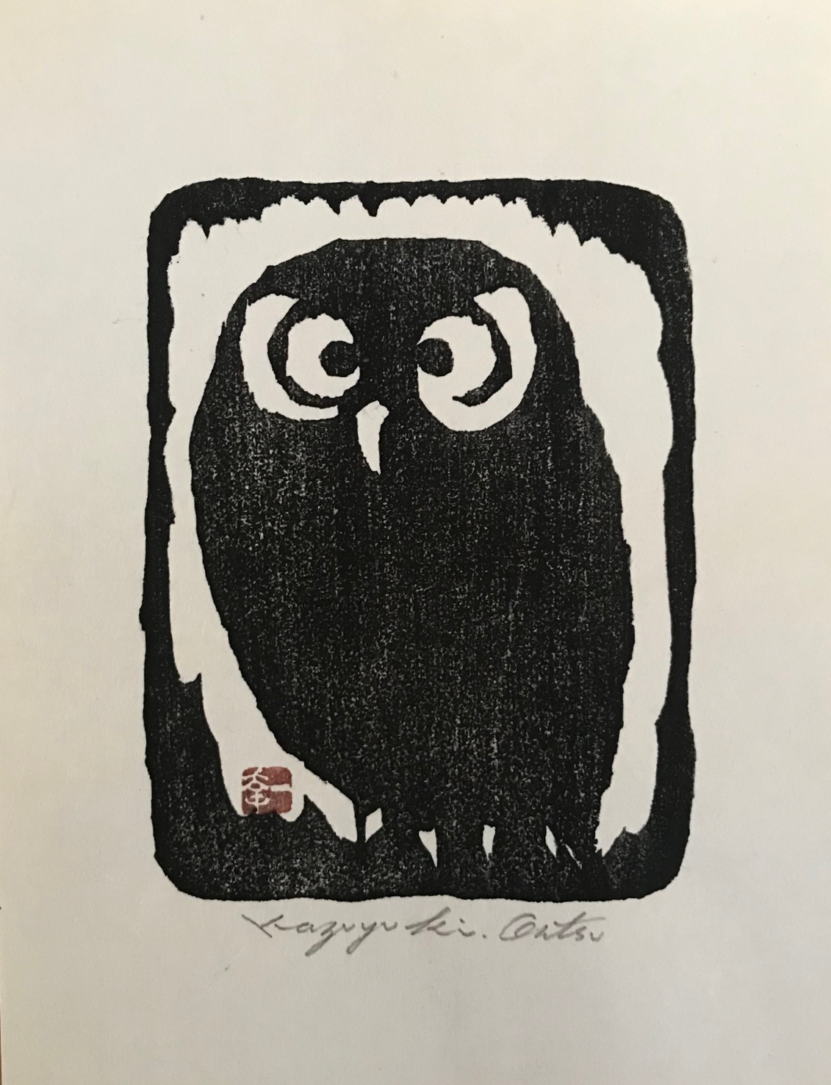 As you can see, the inside surface of the lute body is  clean, and I can now glue reinforcing strips along the seams.

I have cut the strips from medium weight rag/cotton paper: that is the traditional method. I don’t see any particular merit in changing something that has lasted the distance.

Many contemporary makers prefer to use modern material – but I recall the comment of a famous luthier, now departed:

“The way a lute is made affects the quality of the sound”. 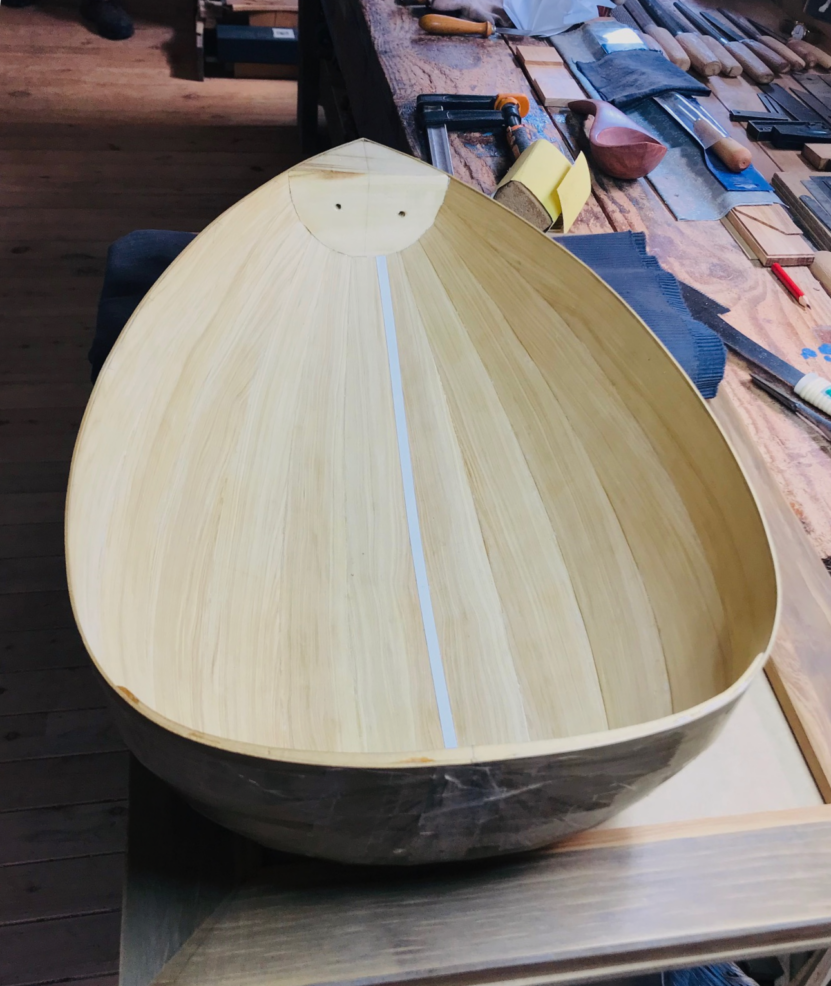 I have used these miniature steel Scrapers to clean up the inside of the lute body.

They are not sharpened like chisels. I run a burnishing iron two or three times along the cutting edge, at a slight angle – and this is sufficient to create an effective scraping ‘hook’.

The edge has to be renewed from time to time. It produces a beautiful polished finish. 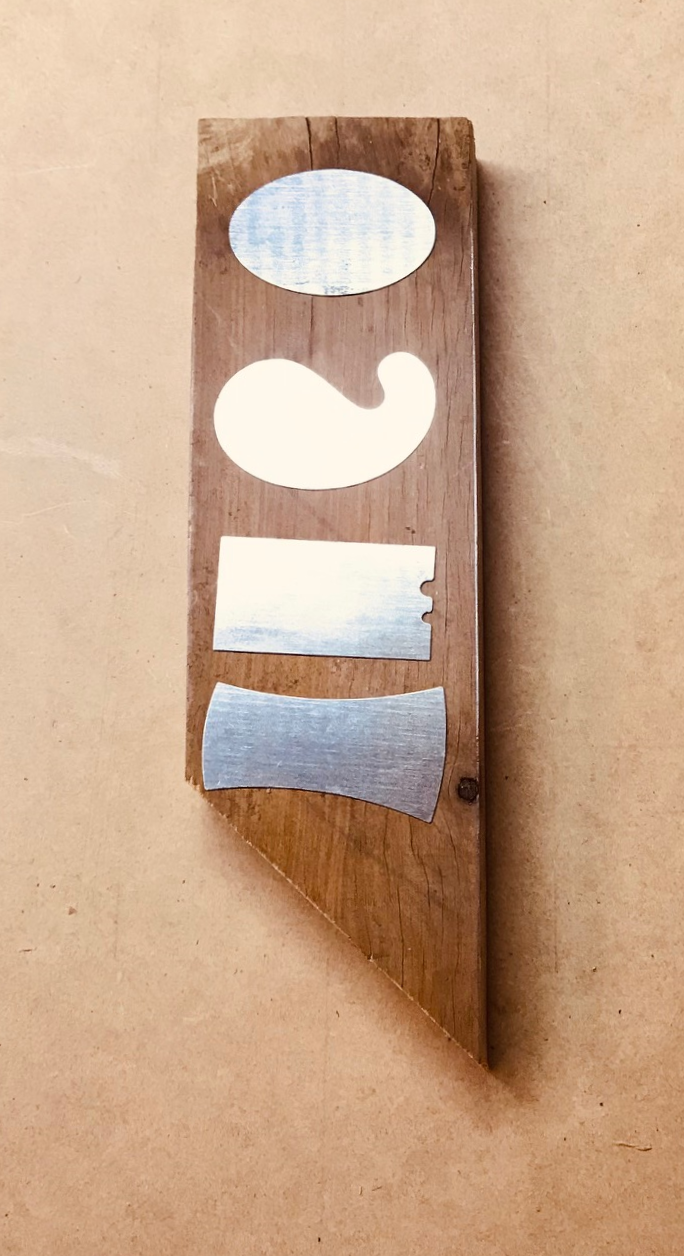 Two additions to my growing fleet of would-be boats.

Few have left their safe moorings. Perhaps it is time to give them permission to depart…. 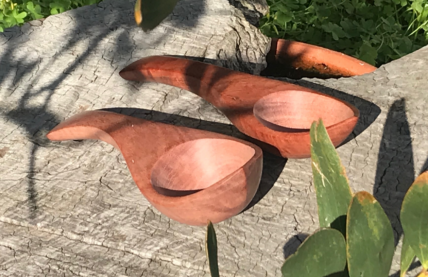 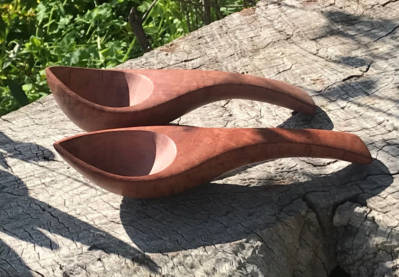